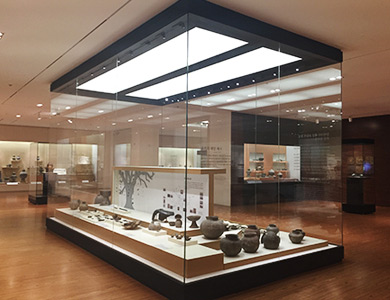 Gallery of History
In the Gallery of History, you can examine how the regional culture has changed and evolved through the centuries, from the Paleolithic Age to the Joseon Dynasty. The displays are organized into seven themes: The Beginning of Prehistoric Culture; The Beginning of Mahan; Mahan to Baekje; North Jeolla: Buffer Between Ancient Kingdoms; Later Baekje: The Revival of Baekje; Goryeo: A New Millennium of Jeolla; and Joseon: A State of Neo-Confucianism. Showcasing many artifacts from recent excavations, the displays include ancient bronze mirrors with intricate geometric designs; moulds for bronze daggers and bronze halberds from the Sinpung site in Wanju, demonstrating the region’s advanced metal technology during the Early Iron Age; and gilt-bronze shoes and other treasures from the Bongdeok-ri site in Gochang, showing the power and prestige of the region, which maintained its independence during the Three Kingdoms Period. Highlights from the Goryeo and Joseon dynasties include artifacts from the Dotong-ri kilns in Jinan, the site of early celadon production, and woodblocks of The Great Compendium of Human Nature and Principle(性理 大全), which were stored in Jangpangak Hall of Jeonju Hyanggyo (a Confucian academy) during the Joseon period. A total of about 2000 works are on display, allowing visitors to fully experience the diverse and dynamic flow of the local culture over time.

The beginning of Jeonbuk prehistoric culture

The 'Beginning of Jeonbuk Prehistoric Culture' corner presents new artifacts from the Paleolithic and Neolithic periods. Paleolithic tools identified in various areas such as the Seomjin River, Gunsan, and Gochang, surrounding Imsil, where a large number of Paleolithic relics are distributed, were exhibited in an easy-to-understand manner. In addition, you can see the lives of people in the Neolithic era in Jeollabuk-do, who were able to eat a variety of foods in various regions through earthenware, fishing hooks, grinding stones, and grinding plates. In addition, dolmen, a characteristic tomb of the Bronze Age, where full-scale farming began, and grinded stone knives and red earthenware identified therein were also exhibited. In particular, by exhibiting burial items such as grinded stone knives and grinded arrowheads identified in the area of ​​Yongdam Dam in Jinan and the dolmen in Gochang, which are registered as a World Heritage Site, you will be able to understand the funeral culture of the people of the Bronze Age in Jeollabuk-do and the characteristics of the group.

In the corner of ‘Mahan, its Beginning’, you can see the Korean-style bronze sword culture that was further developed based on the ironware and bronze ware culture of the previous period, which appeared under the influence of the Yan Dynasty in China from around the 2nd century BC. In the Jeonbuk region, there are more tombs with bronze and ironware than any other region. In particular, the fine-pattern mirrors excavated from the Jeonbuk innovation city such as the Wanju Sinpoong ruins, Korean-style bronze swords, and pole toothed drop were collected in one place to highlight Jeonbuk, the largest bronzeware excavation site in Korea. From the bronzeware that was deliberately broken, including fine-patterned mirrors engraved with detailed patterns, you can see that Jeonbuk had the idea of ​​the time, advanced technology, and the power to leap to an ancient country. In addition, you can see Samhan's development as the ironware culture began in earnest and each regional group was gradually integrated. You can see the image of Mahan in Jeollabuk-do, which was further developed based on new iron tools through tools for making ironware excavated from the graveyard of Mahan, and a loop handle big knife.

From Mahan to Baekje

In the corner of 'Mahan to Baekje', you can look at the Jeollabuk-do area before and after the incorporation to Baekje. Mahan in the Jeollabuk-do region maintained its own power, but in the 5th century, it began to be influenced by Baekje in earnest. However, it seems that the Mahan power, which still has a considerable stature, served as a window for foreign exchanges. Things that show above story are the gold-bronze decorative shoes excavated at Bongdeok-ri, Gochang. In particular, by revealing collective relics such as gold-bronze decorative shoes excavated from the graves of Bongdeok-ri, Gochang, hole jars decorated with small jars, and Chinese celadon jars, you can see firsthand the appearance of the Gochang Mahan powers that engaged in active exchanges with Baekje. In addition, artifacts excavated from Mireuk temple ruins, Jeseok temple ruins, and Twin tombs, including the ruins of Wanggung-ri in Iksan, believed to be the palace of King Mu (reigned 600~641CE), functioned as another center of Baekje during the Sabi period at the end of Baekje.

Jeonbuk, a buffer of ancient countries

“Jeonbuk, the buffer site of the ancient nation” introduces the remains of marine rituals in Jukmak-dong in Buan and Gaya in the eastern part of Jeonbuk. The Buan Jukmak-dong Ruins, located on the Byeonsan Peninsula protruding from the coast, has been a base for sea routes since ancient times and a place where rituals were offered to the sea gods for the safety of sailing. The rituals made by the Mahan powers from the late 3rd century developed into the national rites of Baekje in the 5th to the first half of the 6th century. Here, you can see that the relics of Baekje, Daegaya, Japanese and Chinese were excavated together, such that you may know an international maritime rite was held. In the exhibition room, about 330 major relics are exhibited, including various vessels used for rituals excavated from the ruins of Jukmak-dong in Buan, and bronze tiles with various functions and ironware. Through this, you can get a glimpse into the wishes of people at that time for abundance and well-being.
Sogaya appeared in the early 5th century and Daegaya appeared after the late 5th century in the eastern mountainous areas of the Jeollabuk-do region. In the exhibition room, Gaya's earthenware, weapons, and horse harnesses, as well as outstanding prestigious items such as chicken-head celadon and iron pots excavated from the Wolsan-ri ruins in Namwon, and Baekje and Silla pottery excavated from the Gaya tomb, are exhibited, such that the visitors may see the dynamic Gaya, Baekje and Silla. You can see the figure of dynamic Jeonbuk where Gaya, Baekje and Silla were fused.

Revival of Baekje and Hubaekje

The corner of “Revival of Baekje and Hubaekje,” illuminated Jeonju, the capital of Hubaekje since 660. Hubaekje laid the foundation for the country centering on Mujinju (today's Gwangju) in 892, the end of the Unified Silla, and then moved the capital to Jeonju in 900 and designated the national name as Hubaekje. Relics excavated from Maro Fortress in Gwangyang and Mujingo Castle in Gwangju were exhibited to illuminate the early days of Hubaekje. In addition, tiles excavated from Donggo Fortress in Jeonju, with the words of 'Jeonju castle' stamped on it, and a rubbed copy of 'Jeonggae', the original name of Hubaekje, engraved on the Pyunwoonwhasang stone stupa of Namwon Silsangsa Temple, formed a powerful country for 37 years among the latter three countries, such that the visitor may firsthand check the appearance of Hubaekje. 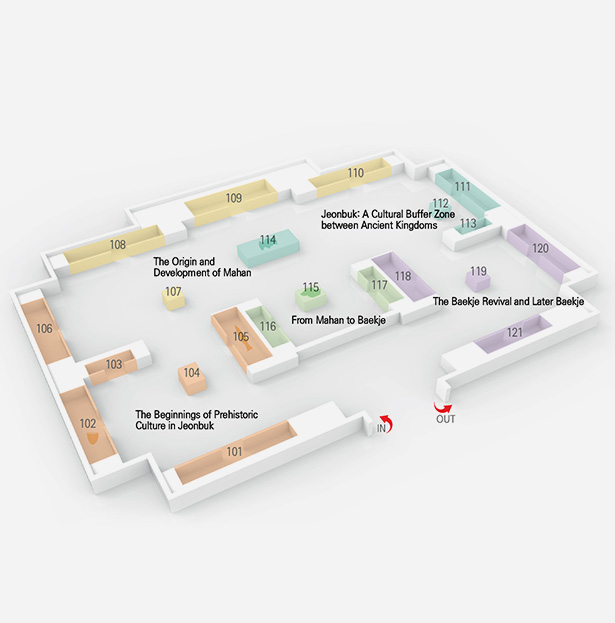 The beginning of Jeonbuk prehistoric culture

Jeonbuk, a buffer of ancient countries

From Mahan to Baekje

Revival of Baekje and Hubaekje