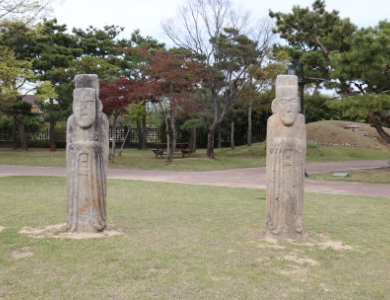 Outdoor Gallery
In the Outdoor Gallery, you can explore a number of tombs, stone structures, and large works of Buddhist art and folk art. Highlights include real tombs from Gunsan, Wanju, and Jeonju that have been relocated and restored, as well as a stone Buddha discovered in Museong-ri, Jeongeup. The local folk culture of North Jeolla Province is represented by a jangseung totem pole (replica) from Buan and a stone pagoda (replica) from Muju.

This area was restored by relocating tombs of Baekje period found in Doam-ri, Wanju, and Pyeonghwa-dong, Jeonju.

Two Baekje tombs were moved from Doam-ri, Gunsan, and one of them was the Front Side Open Stone Tomb, which made the outer coffin frame by stacking stones to protect and enshrine the wooden coffin in which the body was placed, and the entrance to the side. Another one is the Stone Room Tomb, which has a stone room and entrance that is decorated like a home.

Unlike other Buddhas, the stone Buddha excavated in Museong-ri, Jeongeup holds a flower in his hand. This flower is called Yonghwa and is considered a symbol of Maitreya (Mireukbul). Maitreya is said to be the Buddha to come in the future, 5.67 billion years after Sakyamuni entered nirvana and edify all sentient beings through three sermons.